THE Vaal Dam was constructed in 1938 and lies 77km south of the O R Tambo International Airport.

The lake behind the dam wall has a surface area of about 320km² and is 47m deep. The Vaal Dam lies on the Vaal River, which is one of South Africa’s strongest-flowing rivers. It has over 800km of shoreline and is South Africa’s second biggest dam by area and the third largest by volume.

The construction of Vaal Dam started during the Depression of the early 1930s and the dam was completed in 1938 with a wall height of 54.2m and a full supply capacity of 994,000,000m³. The dam is a concrete gravity structure with an earthfill section on the right flank. The dam was subsequently raised in the early 1950s to a height of 60.3m. A second raising took place in 1985 when the wall was raised again. 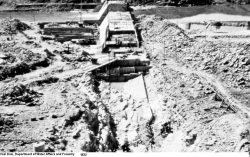 The flood attenuation properties of the dam were severely tested in February 1996, when the area experienced the largest ever flood recorded at the Vaal Dam site. The Lesotho Highlands Water Project pumps water into the system in order to supply water to the people and industrial complex of Gauteng.

The dam has its own island some 5km long. The island was used as a secret meeting place by the apartheid government but now hosts the annual Round the Island Yacht race, which is a Guinness Book of World Records title of the largest inland yacht race.

This website uses cookies to improve your experience while you navigate through the website. Out of these cookies, the cookies that are categorized as necessary are stored on your browser as they are essential for the working of basic functionalities of the website. We also use third-party cookies that help us analyze and understand how you use this website. These cookies will be stored in your browser only with your consent. You also have the option to opt-out of these cookies. But opting out of some of these cookies may have an effect on your browsing experience.
Necessary Always Enabled
Necessary cookies are absolutely essential for the website to function properly. This category only includes cookies that ensures basic functionalities and security features of the website. These cookies do not store any personal information.
Non-necessary
Any cookies that may not be particularly necessary for the website to function and is used specifically to collect user personal data via analytics, ads, other embedded contents are termed as non-necessary cookies. It is mandatory to procure user consent prior to running these cookies on your website.
SAVE & ACCEPT